June was a quite month on Sri Lankan Roads

After the mayhem in May everyone was looking forward to a quite period and the month of June turned out to be just what the doctor ordered. The average number of published traffic alerts per day dropped to 19.8 in June. Compare this against the figure of 40.5 per day for the the month of May. The chart below displays the number of reports published each day during the month. There is a spike towards the end of the month which was caused by several demonstrations held in Colombo. 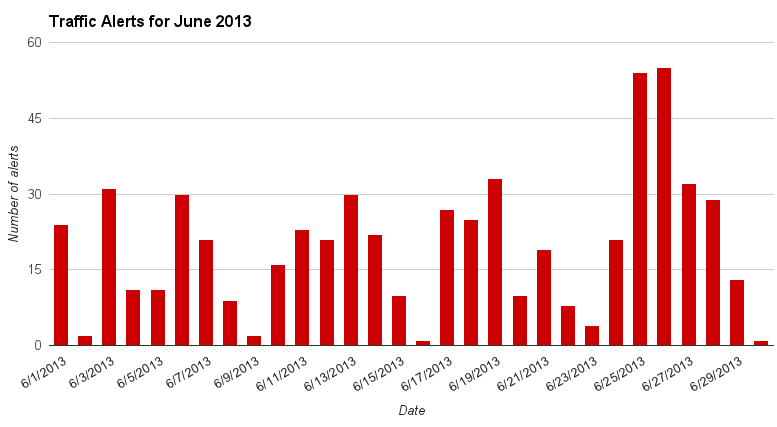 Part of the reason perhaps for the diminished number of traffic alerts was people travelling through Peliyagoda getting used to the higher levels of traffic there (caused by construction work), while others perhaps started using alternative routes. At the same time, Havelock road a place of perennial congestion suddenly quitened down. Several of our regular contributors who travel on this route observed that there was almost never a traffic jam worthy of being reported during the month.

The above chart shows the fluctuation of traffic since the start of the year. Clearly a sharp rise can be seen in May. The red line is the seven day moving average, and it's shown to have tapered off dramatically during June. So how has it been in July? So far a mixed bag, but more on it later.