Been a long December

When the [CHOGM ended](/2014/01/27/worst-traffic-ever/), Colombo’s commuters heaved a collected sigh of relief and looked forward to a quiet December. It didn’t quite work out that way. A popular fashion retailer shifted their main store from the busy Duplication road to even busier Borella. Long queues became the norm as the Christmas shopping season got underway. Shoppers turning into the store always seemed to clog up the left lane of Dudley Senanayake mawatha forcing those travelling straight towards Horton Place to occupy the right lane which of course is reserved for those turning towards the borella junction. Chaos ensued. 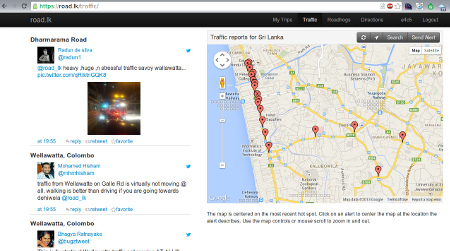 With the old store now standing empty, traffic might have eased up on Duplication road if only they had not dug up the Galle Road which runs parallell to it.

Wellawatte is not the only part of the Galle Road to suffer from the blades of bulldozers. There is construction all the way to Panadura now.

As if things weren’t bad enough already, the Road Development Authority decided to start renovations on Negombo road. Here at least an alternative now exists in the form of the Katunayake express way (even if the exits are always clogged up)

The combined effect was an average of 29.2 published traffic reports per day, which is lower than the November average of 44.8 . December being a month of School holidays ought be compared with August which had 19.3 reports published each day 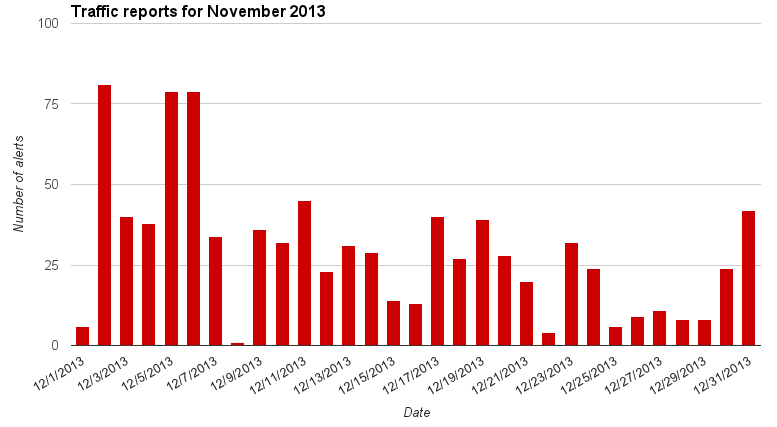 As you can see from the chart above, traffic was more intense towards the first half of the month but tapered off dramatically towards the end when people started going on holiday.

Traffic congestion near Manning Market due to protest by Self Employees Federation #lka #srilanka pic.twitter.com/69ZU7GGs5z

Almost forgot, there a protest or two as usually happens. It’s uncertain if they achieved anything other than cause headaches for motorists.