November 2013, The worst month ever for traffic.

Thanks to the Commonwealth Heads of Government meeting held in Colombo, November 2013 holds the record for the most number of traffic alerts published in a single month. The congestion was caused by several roads being closed as delegates moved about. Since we have already had a post titled CHOGM in pictures this is just a quick look at the numbers. 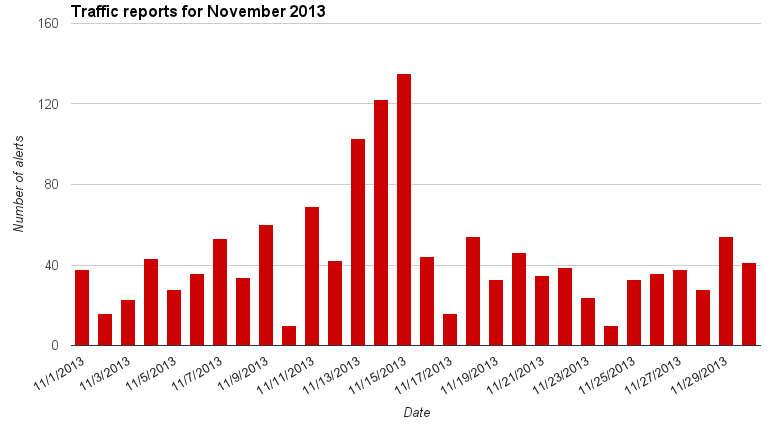 Official schedules were published well in advance with road closure times. However there was nothing in any of the schedules for Saturday the 9th of November, the day on which the first delegate arrived. This surprise attack resulted in 60 published traffic alerts! That was followed by a short respite but traffic returned with a vengence on the 13th when 103 traffic alerts were published. This of course coincided with the arrival of the majority of the delegates to the country.

It was worse on the 14th when the number of published traffic alerts reach 122, this was only 4 short of the record which is 126 on the 13th of May, 2013. The record did fall the next day when the number of published reports shot upto 135. It should be noted that these extreme congestion levels were recorded in spite of many of the schools in Colombo declaring holidays to coincide with the CHOGM. Even the schools that remained open had markedly lower levels of attendence.

By the end of the month, the average number of incidences per day stood at 44.8 (when the delegates left the country, the congestion levels subsided). The number of reports we recieved declined in greater proportion! Probably because commuters had become so used to being CHOGMed that standstill traffic seemed tame by comparision.