The year of the disrupter

Commuters had a good time of it at the start of the year with hardly any traffic being reported during the first few days of the year. It wasn't to last for long. Soon the pace of traffic alerts picked up while the speed of movements on the streets slowed down. One of the biggest reasons for the slow down was a series of protests. There were so many that the question on many a lip was "Will this be an year of protests?" 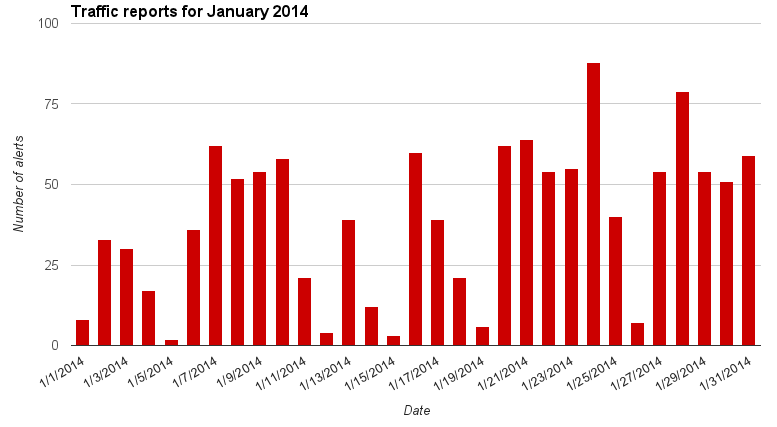 Some of the taller columns in the chart above represent days in which protests were held, while of course the smallest columns were weekends or public holidays. The most disruptive protest was probably the one by university students, after winding it's way through the city it ended up opposite the Fort railway station which disrupted not just the traffic but access to the trains as well.

This was in stark contrast to a deplorable attempt by some people to create a traffic jam just for amusement.

Amongst the positives, the autorities implemented a new one way traffic plan in Wattala which eventually lead to a smoother flow of traffic.

The nett effect of all these was a mean of 39.5 traffic warnings per day during the month of January 2014, which can be compared against a figure of 29.3 for December 2013.