March madness seemed to effect a lot of people who took to the streets protesting against anything and everything.

@road_lk CMB University protest at Reid Avenue towards UGC. More traffic will be their. pic.twitter.com/A81ODnMxuN

Law students of all people, chose to sit down on the middle of Duplication road and block it off completely

It wasn't just a single day of protests. There were many scattered through out the month in different parts of colombo and some days even saw several different protests being held.

And when there weren't protests or strikes, there were visits by foreign dignitaries.

When there were no disruption, there was construction. Most notably in Battaramulla and Kotte thanks to work on the new bridge over the Diyawanna lake. The plan is to replace the existing bridge over the narrowest section of the lake. First they demolished the west bound half of it in great haste but took one and half years to rebuild it. That work completed and the bridge section was reopened in late february. Anyone who expected that traffic would reduce was soon dispointed when the demolished remaining section of the old bridge.

Do not by any means head towards Battaramulla.. Bumper to bumper traffic, accident apparently... pic.twitter.com/WOGhrcuzrU

It was the bridge and not an accident that was causing the traffic in the above twitpic, but that wasn't the only place effected by road works. Far from it.

You don't have to tell them to drive slow! #traffic situation at Katubedda junction @road_lk pic.twitter.com/mtsu1WqMLI

So how did the numbers add up after all these events? We had a mean of 33.2 traffic reports published per day during the month. That is higher than the February average of 28.2 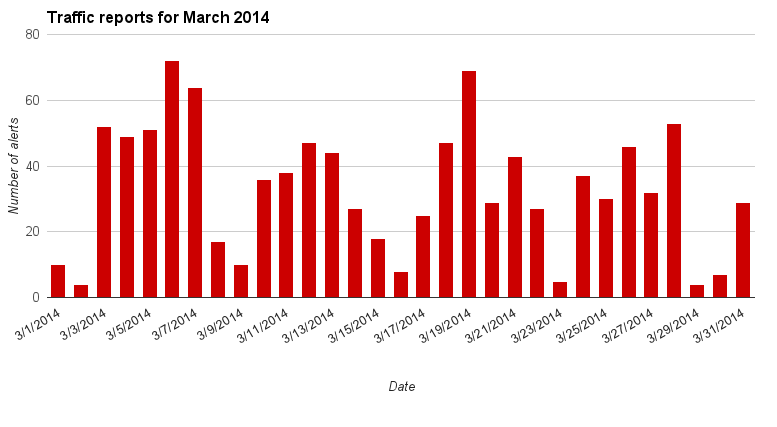