Actually there wasn't that much of traffic on May day, since it was a holiday but things were completely different after that. The International workers day was probably the inspiration that railway staff needed to go on strike. To make matters worse it seemed that trains were always having a breakdown or derailment every other day.

With train services being disrupted, more people took to the streets but for a change the authorities decided to be proactive and to try out new measure to reduce congestion. The most significant being a plan that has become known as the 'Rajagiriya Extra Lane' scheme. Normally Sri Jayawardanapura Mawatha has three lanes in either direction from the edge of Battaramulla to the Castle street in Borella with a divider right in the middle. Traffic cones were placed on the road segment on the other side of the barrier. Thus one lane in the Borella to Battaramulla direction was allocated for use by motorist travelling in the borella direction. Effectively making it four lanes towards Borella and two towards Battaramulla. 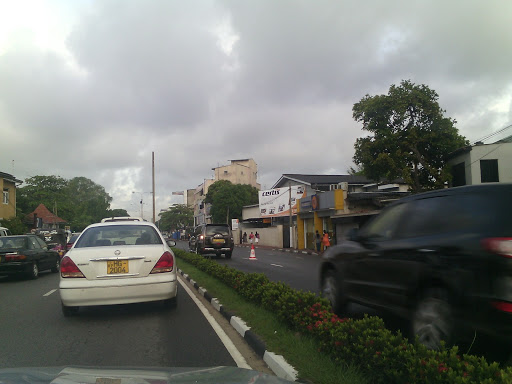 The very first time they tried it utter chaos ensued. Admittedly it wasn't entirely the fault of the plan. It's start date had coincided wth a event at the Sri Jayawardanapura municipal council which resulted in several roads being obstructed in Rajagiriya. From the next day onwards things progressed smoothly even though the reduction in traffic was marginal.

In other places, construction work continued play a significant role.

May is also the month of the Wesak holiday where the streets of Colombo and many regional towns are decorated with wesak lanterns and pandals are erected in many locations. Naturally people take to the streets in large numbers and you can guess what the result is.

It is sad that during the month of wesak religious intolerance raised it's ugly head in the Aluthgama area. This was an early warning sign that was largely ignored and sadly worse was to follow in June.

Heavy traffic in Aluthgama - Matugama Road due to the tension situation in Dharga town pic.twitter.com/pjctNcJBBA

We already spoke about strikes by railway unions, were there any student protests as well? The answer is yes and as usuall they caused quite a bit of inconvinience for road users.

And now we come to the conclusion. What do the numbers say? It was a month of heavy traffic. There were 38.9 reports for heavy traffic each day. In contrast the April figure was just 28.3 to find a number this high, we need to go back to January when the 39.5 reports each day. 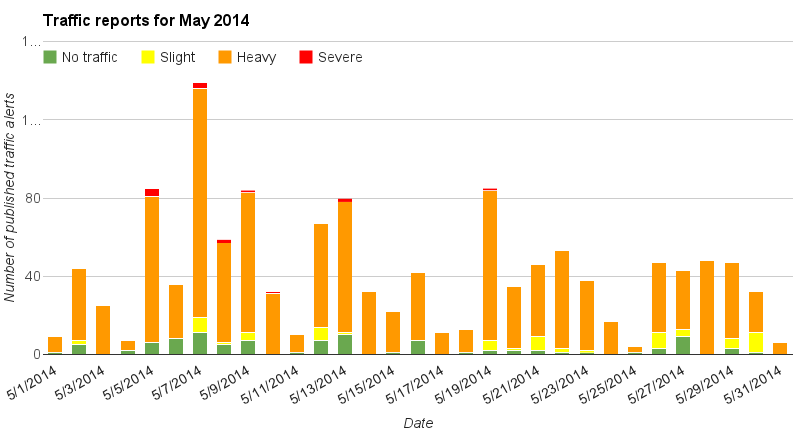 You will notice that we have changed the format of the chart slightly. That's because we now recieve a significant number of reports saying there is no traffic at locations that are usually known for traffic. This is really usefull because many people are in the habit of taking detours to avoid severely congested area. If they can see that it's not congested on a particular occaision they can take the shorter route there by saving time and money. These 'no traffic' reports are not included in the 38.9 average given above. If they are also taken into consideration the number of reports increases to 41.9 per day.