The financial year ended with chaos in the financial district of Colombo. It wasn't caused by accountants or stockbrokers but by people who might become one in the near future. Student protests are dime a dozen but this was one different because their stated objective was to create as much traffic as possible. To this end they had informed the police that they are marching to the University Grants Commission but marched to Temple Trees instead.

At Temple Trees they were tear gassed, from there they ran to the Kollupitiya junction and stat on the middle of the road. That resulted in the Galle Road being closed.

Looks like students have no idea to leave. They have brought in sound system too.. dataset.. let us go home now pic.twitter.com/8s3assb2rJ

So while the Galle road was deserted it caused grid lock all across Colombo.

The duplication road had to revert to being a bi-direction road again.

The ensuing chaos lasted well into the night and it wasn't just Kollupitiya and it's surroundings that were effected.

That's enough about student protests but rallies continued to create traffic, this was a political rally that clogged up Ratnapura

And this was a state visit by the Emir of Qatar which resulted in road closures. The Emir's visit was a brief one while the visit by Prime Minister Modi of India was not.

The police created elaborate traffic plans to deal with it. These schedules are rarely adhered to and this wasn't an exception either but it was controlled madness because early publicity meant most people rearranged their schedules to avoid those routes.

Scenes at Unity Plaza. Lots of people and some smoke. No traffic on Galle rd though Station Road is closed. @road_lk pic.twitter.com/3ZUo2YHYGi

This road was closed not because of a state visit but because of a fire at a computer shop. While the media repeated ad-nauseam about severe traffic in the area, our users disagreed.

The usual causes like roadhogs, construction and rain also played their part in March but they weren't as siginificant as the state visits and strikes.

Heavy traffic on Galle road towards Colombo as the Thomian parade hits the streets @road_lk pic.twitter.com/PVFkb1xXmI

an unusual cause though was school big matches and parades. They only happen during march madness. One of those parades are aptly named 'Psycho parade' What does all this add upto? 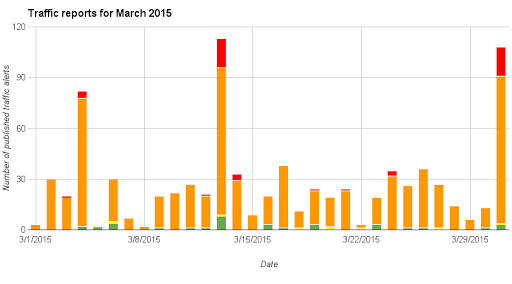 There are three sharp spikes on this chart they were caused by the student protests discussed above and the state visits. Despite the spikes the average number of reports per day was just 30.1 (it was 25.2 for February and 33.2 for March last year). However a large number of these traffic said extremely high congestion, closed or standstill and these are the red blocks on the cart above.